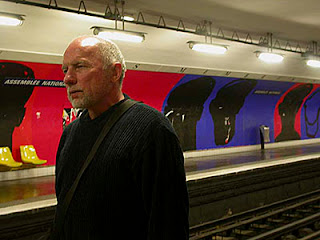 About Exocentrist2: This is the "second coming" of a short-lived (3-month) blog I created three years ago--exocentrist.com--still online, including scores of posts, but no longer maintained.
Capt. Henri Rochard: “You from Brooklyn?”
Sentry: “Yonkers.”
Capt. Henri Rochard: “What are those?”
(Cary Grant, “I Was a Male War Bride”)
OK.  What are exocentrists?
exocentric   adj.
Standing “outside” the egocentric view of a situation--an indirect move, a head-fake, an unexpected emergent meaning. Etymologically, it means “standing outside the center”–a more extreme form of eccentricity.  Ex-stasis = standing/being “beside oneself” = ecstasy.  A mashup of these definitions sounds about right.   This blog is a hymn to Outsiders--not to centrist politics, centrist artists, or centrist style. Quite the reverse!
Me?…
I’m Darrell Taylor, a retired professor of philosophy and film, living in Maine since the late 1980s. I was one of the first few web developers in Maine, starting my Eyemagic company in 1995, and making scores of web sites for artists, companies, therapists, a wrestler, and so on, until closing Eyemagic around 2003.  I blogged for a while in 2003 as lightandvariable, then used that name for my renewed computer/web company. In addition,  I have made very large (8 – 12 foot long)  photocollages since the early '90s (photocollagist.com), and have exhibited my work in various galleries. I have been with F., my photographer/teacher wife for 29 years. We sailed our 31′ sailboat from Maine to the west coast of Florida and back, living aboard the boat for a year and a half (mostly 1992). My interests in philosophy were largely French 20th century (Sartre, Merleau-Ponty, Derrida, Barthes), but I taught Hegel, Nietzsche, Freud, Husserl, and Heidegger, as well as many courses in film theory, film and politics–perhaps 30 different courses over 25 years, mostly at Queens College, CUNY, but also visiting at Penn State, Yale, USC, and other schools. Helped found the Film Studies department at Queens, and taught mostly film courses last 13 years of my time at Queens. Don't bother googling my publications--I avoided most professional expectations. Politically, I am Left Progressive–much to the left of any Democrat holding national office. I am angry that our country has been taken over by Republiclowns, fundamentalists, Fox/Limbaugh clones, and anti-science “know-nothings,” and hope to live long enough to see America repair something of its heritage as inclusive, free, a bastion of civil liberties and justice, and an example to the world. Of course, much of that heritage is ideology, a myth.
I'm surprised to be turning 80 in a month!
My Work History
Kansas childhood: lawn care, newspaper delivery, salve salesman (1936-49)
Oklahoma Jr. High, High School + : newspaper delivery, antenna installer, radio repairman, factory worker–assembly line in corrugated box plant (1949-55)
Indiana College: gospel quartet singer, choir director, associate pastor, publicity/art director for national religious radio program (1955-59)
California Grad School: Danforth Fellowship through Ph.D. Children’s choral director, associate minister, cantor in reform temple, soloist, factory worker (windows), mason’s helper, interior decorator deliveryman and janitor (1959-1966), college teacher in 2 colleges.
France: study, no pay. (1966-67)
New York and Pennsylvania: professor, visiting professor (1967-91) in 4 colleges and universities.
Maine retirement, 1991. Sailing adventures, 1991-93,  founder/owner of Eyemagic Web Developers, 1994-2003, founder/owner of lightandvariable, photocollagist–large-scale murals, frequent travel to France.(2003-now).
WELCOME TO MY BLOG! PLEASE VISIT OFTEN, IF YOU ENJOY WHAT YOU FIND HERE…