Is Cher Still There? Stopping Time to Salvage Identity

Is Paris still Paris?  And the Loisaida, aka Alphabet City?  Is a massively restored work of art or building or gentrified neighborhood the same painting, building, or hood as its original? Am I the same person I was 70 years ago?  Is a single difference from a moment before sufficient to call any being's identity into question? How much of Cher would have to be replaced by plastic surgery to justify a claim that she's not the same person?

Time's passing plays havoc with our ordinary language concerning such matters. What can be meant by "same"?  We define a "noun" as name of a person, place, thing, or idea--as if Heraclitus (500 BC) had never written about not being able to step twice into the same river.  Does modern physics teach us that all nouns are really verbs--shorthand for processes, passages, structured changes? Language seems to be a web of useful lies to allow us to survive the processes that surge through us.  "I" "am" a momentary "kink in space-time" as "energy-event"--though any formulation of this sort is immediately misleading and false.

Or is it the other way around?  Do we invent time to keep everything from happening "all at once," while the universe/Absolute dwells incessantly in self-referential, unchanging perfection?  Such questions were exhaustively explored over 2,000 years ago, but most cultural production since (religion, philosophy, science, law, history, art, politics, myth, literature, and so on) cannot dispense with the ongoing debates, nor settle the question in any satisfactory way, stuck, as we are, in the viscous melange of language and existence.  Somebody will always be writing some version of Being and Time.

To borrow a Jesuitical term: the "proximate cause" of these thoughts was a fascinating article, "The Custodians," by Ben Lerner in the January 11, 2016, New Yorker, which provides a peek into one of the inevitable consequences of questions of change and identity, as it applies to museum practices in restoration of works of art. (How to respect the original work of the painter--by restorative interventions to recreate the intended object as of its inception, or by allowing the ravages of temporal change to re-present a work in historical process?)  We see the same sort of debate in the Supreme Court arguments concerning the Constitution, the framers' intent, the ontology of law, and so on.  If my DNA is permanently altered by stem-cell transplant, can I be tried for a crime committed before the transplant?  More radically, if only neurons in the cerebral cortex are never replaced in me in the course of my lifetime, then I am quite literally a different being every decade or so.  May be time to change the marriage vows to "till death do us part, or 51% of our current carnal cell cohort are no party to this contract."  Could a clone of myself be tried for a crime I committed?  If I pay 56 million dollars for a painting by Picasso that turns out to be by a counterfeiter who has successfully replicated down to the molecular level a painting that was subsequently destroyed in a fire, what is the actual value of what I've bought?

Once noticed, it is in fact, difficult to avoid the question everywhere, ...so we throw up our hands, apply a band-aid to the issue at hand, and proceed as though the matter had been settled--usually building an elaborate ideology around our way of treating it--a kind of blindfold against the temporary character of the band-aid.  Are you listening, Justice Scalia?

I should not have singled out Cher to serve as example: her alterations are, by entertainers' standards, minimal, and there is so much unchanged of her and her work, that it would make no sense to seriously question whether a new album by Cher is, in fact, by Cher, whether or not I subsequently decide that the music was worth the purchase price.

I sit here, three weeks from my 80th birthday, with a related, but different sort of question in mind: Who am I?  What have I been?  Are all biographies, diaries, memoirs, photographic, aural, and memory-based histories entirely fictional?
Who the hell is this guy? 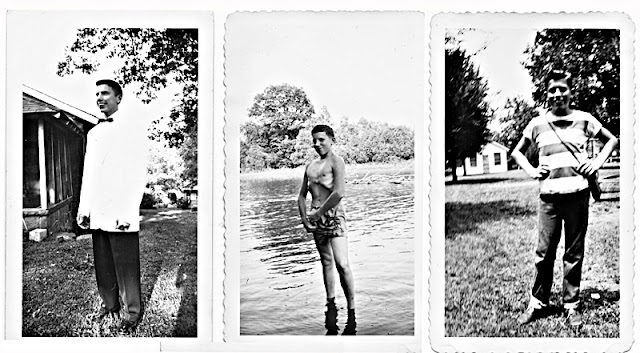 All three photos were taken 60-65 years ago.  All were labelled with my name. All were taken in Oklahoma, outdoors with trees.  I remember the striped tee and the old folding Kodak case that I took to camp that summer. This guy had hair. There are structural hints of continuity, of course: male, facial bones, arm length, and such.  One wants more evidence.  We look for "signs" of the future, retroactively known.  Destiny is a comforting alibi; it takes away responsibility. "See? Always liked water.  Interested in photography. Couldn't decide between dignity and slapstick. Obviously same guy."  But I crave more: did "he" guess that he'd be a philosophy teacher, that he'd love France, that he'd live on both coasts, that his last years would be spent in Maine, that he'd get to know New York and Paris as well as he knew Coffeyville and Tulsa?  No.  And not the slightest sign of any of that in the photo.

The author (Ben Lerner) of the "proximate cause" article, linked above, was, it turns out, like me, born in Kansas.  His birthday is one day different from mine in February (though he was born 43 years after me).  Does he grin over old photos of himself being 13 in Topeka? There are a few differences besides 4 decades of living: he is a much honored poet, novelist, essayist, and winner of a MacArthur Fellowship, a Guggenheim, and a National Book Award, just for starters.  He and Adam Gopnik also comprise my private roster of "must-read-immediately" regular contributors to the New Yorker and many other prominent print venues.  They are still here, still developing as writers and thinkers.  Will they turn out to be icons of our century?  Where will they be in 2084?  This year my dad would be 109, my mother, 102.  They are not here--just like the kid in the 3 photos above, but it seems different since I am still here, however difficult it might be to explain this identity over time.  In one physical sense, they, too are still here: their dust is still inventoried in the Oklahoma soil.  And the rust molecules of my first car, a 1941 Plymouth are also still here...somewhere...

So what am I doing, sitting here typing this blog post?  No way the words will live on after me (I don't even have my collection of movies on Betamax tapes any longer, and my floppy disks have no port on my computer any more, and the hard drives on this computer, and on the web servers sending my words onto the network will also pass into obsolescence and landfill, as will I.

We're thrown onto the dance floor without having asked to appear there.  May as well dance to the music, until it rocks us to sleep.  We'll take turns.  I'll keep you being you, if you'll keep me being me, at least until someone fails to notice.  A quick bow to Yeats, "How can we know the dancer from the dance?"

Posted by Exocentrist at Tuesday, January 12, 2016